Keep your friends close, and your anenomes closer.

We've got a simply tentacular pair of cards to share with you today. Both of these are making their way into the Oversky this summer. 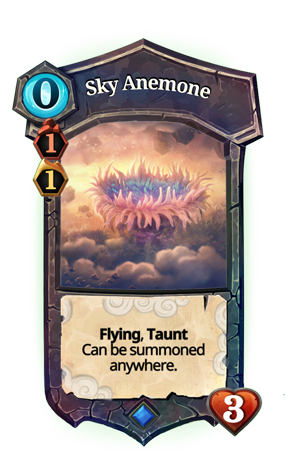 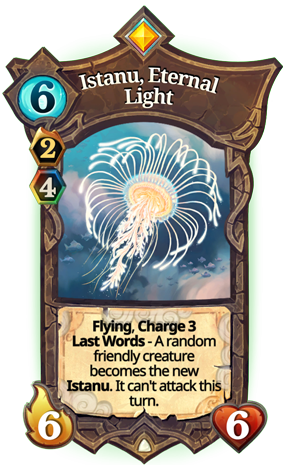 Sky Anemone will be introduced as the first Structure in Faeria with flying! Deploy this distraction anywhere on board at a cost of no Faeria. For those wondering, no - you cannot put this on opponent land and build land off of it, as this is a structure and not a creature. You may be familiar with this rule already from Wind Gate's functionality.

Istanu, Eternal Light is a legendary ever-living jelly that's spirit can pass from creature to creature. It's also extremely beautiful, and that should count for something.

Istanu is making its way to Wisplight Falls next week, which is being released Tuesday, August 22nd at 17:00 CEST.

We know a lot of our players are interested in how we'll be approaching the new cards introduced by Oversky and the resulting metagame. Let's talk about that.

First of all, it is our goal to tone down Oversky cards as little as possible for the specific reason that they cannot be disenchanted for full value afterward. They cannot be disenchanted at all, actually. For that reason, the last thing we really want to do is make players feel bad that their favorite new card is no longer as strong. Secondly, if you are familiar with our general balancing policy, we work as hard as possible to avoid knee-jerk reactions to community feedback and only make changes when we're absolutely sure they are necessary for the overall health of the game. We also recognize that the meta will be changing on a weekly basis as the Oversky rolls out, and each new week will likely produce a playing environment in a constant state of flux.

With all of that in mind, we fully anticipated that by pushing multi-color decks in brand new ways with Oversky, we would be opening the door to some very powerful strategies using cards in ways never really seen before. Faeria is such a complex mechanism that it would be foolish to say that we could predict exactly how the gameplay landscape would settle after introducing fundamental concepts such as Wild Lands or powerful new high land cost cards. These are all beautiful problems to deal with, because we feel the end result is going to be a Faeria that is more engaging, deep, and exciting than ever before.

We don't want to turn the Oversky release period into a testing lab where we make radical changes each week, but we do want to push where necessary when we recognize fundamental problems that are shaping the meta in unhealthy ways. While we spend a lot of effort internally testing new content, our manpower is limited and there is simply no substitute for observing the effect the Oversky cardbase has over many thousands of players and many thousands of games. Therefore, do not be surprised if a change or two makes it into the Tuesday releases in order to promote deck diversity and overall enjoyment of Faeria. Thank you for your continued feedback in this area.

One card we want to bring particular attention to is Three Wishes. 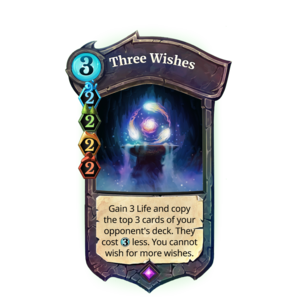 Three Wishes is a card that was meant to provide a way for players to experiment with multicolor decks by providing them a worthy goal to work toward at a time when there simply really weren't many others, due to the limited card base. We love how this card encouraged people to play fun four color decks, but aren't fond of how it generally means that if you create a four color deck you most likely are going to include this card.

The Oversky changes all of that. With Wild lands, we now have a way to create powerful multi-color cards that will drive deck creation in tons of unique ways. We don't need Three Wishes to be the enabler anymore - and for various reasons we really don't want it to be the driving force behind four color decks, including but not limited to the way the card plays in slow mirror match-ups.

We fully anticipated a sharp power spike for Three Wishes in Oversky as part of all this, and we want to make it clear that we have a very close eye on the card and are seriously considering a change. We know this card is a favorite among some of our players, but please understand that by creating the Oversky we wanted to provide better alternatives to Three Wishes, and continue to make a lot of them. While we do not plan on changing Three Wishes next week, we wanted to give fair warning to our playerbase and appreciate your feelings on this card.

There is currently a bug where those who purchase the Gem Starter pack are not properly receiving their legendary cards. We will be fixing this Monday, and all players who made this purchase will properly receive a random Legendary they do not own. 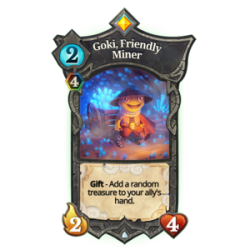 Goki was having a little trouble earlier this week figuring out who to give his treasures to. He's received some counseling and now will properly deliver them to allies as requested.

Due to an internal miscommunication, we improperly presented the current functionality of the Emperor Kaios avatar set in our recent Adventure Pouch post.

While Kaios does have voiced emotes for the Emperor's Challenge - the functionality is not yet implemented for player avatars. While we have no ETA on this feature going live, know that it is fully intended players will be able to make use of these voices in the future.

We apologize for any confusion and will work better at not providing any misleading information when it comes to cosmetics. 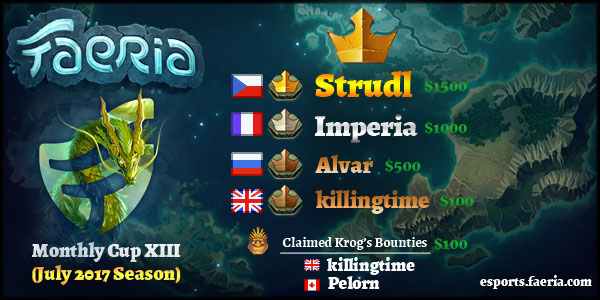 In case you missed it last weekend:

If you missed the card reveals during the stream:

Deals of the Week

This week is the first week Hoaka's cosmetic bundle with emotes becomes available!

While we were not able to get Oversky cards onto The Hub this week (yes, we are that busy!), we have this task as a really high priority for the community. We apologize for the wait.