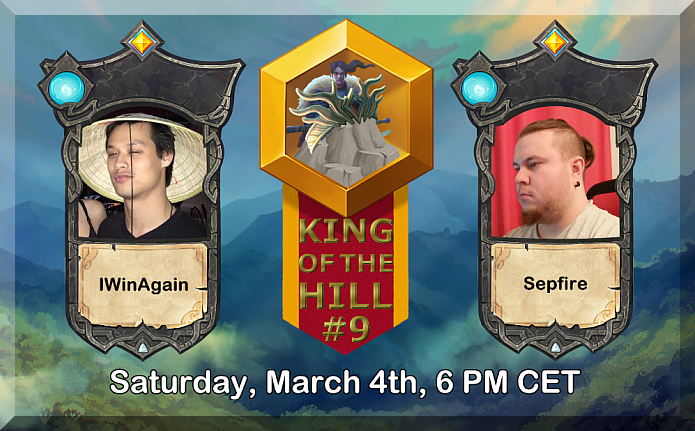 Noaphiel's King of the Hill #9

Noaphiel's King of the Hill is a community showmatch series where some of the strongest players in the game square off in a Best of 9 series. Winner becomes King of the Hill and defends their crown in the next one! Here's all you need to know about the next event, taking place this Saturday, March 4th.

King of the Hill (KotH)

The next KotH event:

What is King of the Hill?

King of the Hill is a weekly tournament series, taking place every weekend, where two top players fight in a Best of 9 series.

The winner will be the King of the Hill and tries to defend his title in the upcoming week against a new challenger.

What are the rules?

Each player will bring six decks, of which at least two decks are suppose to be mono colored, at least two have to be multi colored and the remaining two decks can be chosen freely.

The First player who reaches 5 wins will be the new King of the Hill.

Who will select the new challenger for the upcoming week?

The new challenger is decided by Noaphiel, the host of the tournament. The challenger will be selected on terms of past achievements, nationalities, team affiliation and ladder ranking.

The goal is to provide the most challenging opponents for the current King of the Hill, a wide spread of included nationalities and games on the highest possible level.

Applications for participating in the tournament are highly appreciated.

When and where does the series take place?

The series will take place every weekend in consultation with the current King and the casters. The preferred date is Sundays at 6 PM CET though, which can be shifted due to availability or overlapping events.

Every King of the Hill will be streamed on Noaphiel´s Twitch channel with a high quality casting staff.