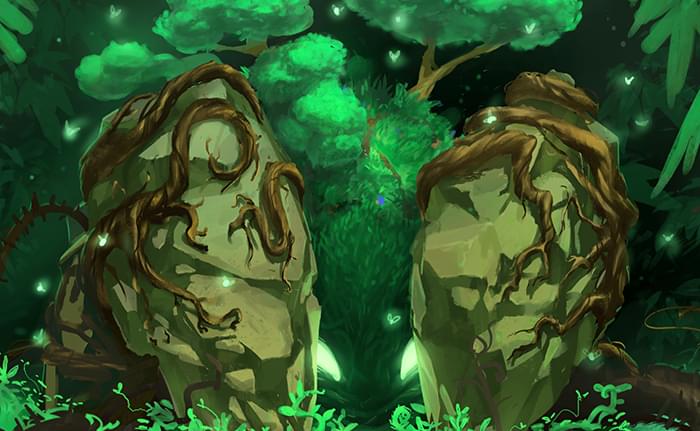 I started playing Faeria when it released in March. Like many others, I loved the feeling of playing a card game mixed with the depth of a strategy game. Recently, however, I found myself at a plateau. I had been improving for months, played for hundreds of hours, and loved every minute of it. Why was I suddenly unable to continue improving? I pondered this for a while, and my frustrations with the game continued to grow. Now, I’ve managed to break through this mental block. This article defines analogical and heuristic thinking in Faeria, as well as methods to improve your problem-solving strategies.

Inherently, Faeria is a game that mixes luck and skill. An experienced poker or card player understands that a 90% win rate is unreasonable. In fact, you should consider yourself a “winning player” if you have even a 51% average win rate. Randy Pausch in his famous Last Lecture said, “It's not about the cards you're dealt, but how you play the hand.” You can find hundreds of quotes offering this same sentiment. Any sucker can win a game with luck, but only a skilled player can win a game when he’s down. Achieving even an impressive 55 - 60% win rate in the long term is only possible by playing well, and winning difficult games.

The elements of luck and skill are not the primary focus of this article, but this information should be the base upon which to build. If you have not yet broken the mindset that Faeria is a game of luck, this article may not be as helpful to you. I say this without judgement, as I am still working on this mindset currently. We all have moments where we want to blame luck for losing a game. However, to attain the most from this article, it is necessary that you acknowledge the importance of self-improvement over luck in this type of game.

There are two methods I'd like to focus on, to help improve how players approach problem solving. The two methods I would like to compare are analogical, and heuristic approaches. I believe that if a player becomes more aware of the thought process they use to “solve” a game of Faeria, they will further their ability to learn the game. This line of thinking is precisely what helped break me out of my recent mental block, and brought my game up to a new level. The feeling of hitting a “skill ceiling” often seems insurmountable, but it is my hope that this information aids players in improving their game.

First, analogical thinking. For reference, this Stanford article is where I researched the technical definitions of the term. For brevity, I will define the term in relation to Faeria gameplay. Analogical problem solving is the process of thinking through a problem step by step. Each step that you analyze is related to the step before, as well as the step after. For example: I need to decide whether I play a Forest tile in between the wells for collection, or play it forward for aggressive positioning. Before I put down the tile, I spend time playing out each possible outcome in my mind, step by step. I consider what cards my opponent may have, what creatures I will play on this land in the future, and the advantages and disadvantages of each position. Eventually, I come a conclusion of which play has the best possible outcome for me, and I place the tile there.

Second, heuristic thinking. For reference, this Claremont article has the closest definition to how we will use the term here. Heuristics is a slightly vague and complex topic with different definitions in different fields. For our sake, I will again define the term in relation to Faeria gameplay. Heuristic thinking is a method of problem solving that is more commonly known as “trial and error”. For example: I need to decide where to play that Forest tile again. Aggressively, or defensively. This time, I make a quick summary of my current knowledge of the game and throw the tile down aggressively. I didn’t explore every possible outcome, but I’ve used information from my previous games, and my knowledge of the board state to decide that an aggressive tile will probably work. If this play ends up being bad for me, I’ll make a mental note of it and move on. The next time I need to make the same decision, I can learn from my mistake and improve.

Let's explore a few key points that best represent analogical thinking. In our first example, we have our lands created, and we’ve reached the midgame. From this point forward (with a few exceptions) we will have to decide whether to +1 or Draw from the power wheel. Novice players, and even experienced players, might just look at their Faeria count and collectors, decide it’s enough, and draw a card. (Even worse, they might play out their turn and then draw a card!) What’s the analogical way to process this decision? Well, we look at the cost of the cards in our hand, look at our current faeria value, and calculate how much faeria we are likely to have next turn. Oh, and we’re not done yet. Now we need to remember our deck list, all the cards we’ve drawn so far, and calculate what we’re likely to draw next. How many cards could we draw that help us this turn? Are we trying to dig for a card that could win the game or save us from dying in the next 2-3 turns? A heuristic decision here is almost never necessary, we can almost always decide whether +1 or Draw is a better move. As you improve in this process, you’ll be able to think multiple turns ahead. No more panicked moments of being one faeria off lethal!

Let’s look at another common situation. Dropping creatures onto the board which don’t have an immediate effect. Once more, novice players (and players with Hearthstone habits) are often tempted to consume all their faeria resource each turn. This time, we’re playing Blue Jump. We have a Triton Warrior, a Ninja Toad, and a Prophet of Tides on the board. We have four open lakes, and two copies of Battle Toads in hand. What luck! We have 8 faeria, and we can play all of them this turn! We shove 7 creatures onto the board, +1 (since we’re out of faeria) and pass. Wait a second, we forgot we were playing against Crackthorn, and he has exactly 10 faeria this turn! The roar of Garudan, the mighty dragon echoes out of your speakers as your entire board is wiped in one turn. On the plus side, no one will hear your sobbing if you just turn your music up. Thinking analogically would have allowed us to read our opponents faeria resources, predict Garudan in his Crackthorn deck, and even Draw instead of +1. Crisis averted.

Heuristic thinking has its place in some problem-solving fields. If you’ve ever heard the term “don’t over-think it”, that’s someone telling you to just use Heuristics to quickly find a solution and see if it works. You might find rare moments to try out heuristics in Faeria as well. There are times where you simply don’t know enough about the game, or your opponent, to make a precise analogical play. You might be trying to think through potential outcomes, but finding yourself unable to do so. In that moment, you’ll switch to “trial and error”. Whatever the outcome is, you should pay careful attention and learn from it, so next time you are prepared to think it through.

As an example, we’re playing a Crackthorn deck against a Blue Reaver deck. (A situation I found myself in recently). Without getting too specific, we’ve played through most of the midgame and are approaching the point where Reaver could hit the board (and kill us the following turn). We have a couple of weak creatures on the board, but we can hit face to put our opponent at 3 health (setting up Flameburst lethal if we draw lucky next turn). The other option is to clear his 0/5 collectors for free. We’ve walked through both options analogically and can’t decide. What if he plays Radiance? What if he buffs his creatures to clear our own, and we can’t draw Flameburst next turn? There’s no way of knowing for sure! There’s too much hidden information in his hand, and it’s impossible to avoid a heuristic decision. We simply must go with our best guess and learn from the outcome.

(Theoretically, in the above situation, you could calculate the chances of the opposing player having specific cards, and make an analogical play based on that prediction. For the sake of the argument, let’s say you suddenly forgot how probability works.)

You shouldn’t feel like a bad player for not knowing the outcome of a play. If it was easy to know what the best play is every time, competitive Faeria would be quite boring. One of the first steps for me breaking my mental block, was realizing the value in heuristic decisions. I’m not guessing because I’m a bad player, I’m making the most informed decision I can, and witnessing the outcome to learn. Even if a situation feels hopeless, or you misplay terribly, all that matters is learning and improving.

Now that we know what analogical and heuristic decisions look like, how can we better prepare for them? The following suggestions are tools I have found useful. Keep in mind, none of these are intended to be a quick fix. I’m not writing a “Top 10 Faeria Tips: Pros Hate Him!” article. Focus on one piece of the puzzle at a time, and when you feel comfortable, move on from there.

Generally, analogical thinking is the best for improving at a strategy game such as Faeria. Consistently thinking through your plays step-by-step, and coming to a well-informed, logical decision is much preferred to simply hoping your play wins the game. In a perfect world, we know the best line in every situation. There is a reason that tournament games have a time limit! With infinite time, players could continue to use analogical thinking until they find the perfect move. The trick to being a skilled player at high levels of competition is using analogical thinking quickly and effectively. You must also be able to accept heuristic decisions without tilting. They will happen, no matter your skill level.

So, here we are. We’ve learned two lines of thought, and how they apply to learning and improving at the game. We understand that heuristic thinking is only helpful if we play close attention to the outcome, and learn from it. We know that analogical thinking gives us more power over the outcome of the match, and should be applied every turn when possible. I’ve had games where I make a lazy decision on one turn, and it loses the game later. This must be avoided if you want to improve.

I’ll see you all on ladder, and I look forward to seeing more players using up their full turns to think through plays!