After a year in Early Access, we are excited to bring Faeria out of beta with our 1.0 launch for PC and iPad!

The full launch version of Faeria is now available globally.

You can grab it through Steam for PC, Mac, Linux, or the App Store for iPad.

To celebrate our time in Steam’s Early Access, for a limited time we are offering a 40% discount (from $34.99 to $20.99) on our brand new Steam Pack, available exclusively on our Steam store page - check it out as a great-value alternative to buying in-game.

It’s been a thrilling ride. Let’s talk about how we got here and, of course, share with you what’s included in today’s update.

Our Last Year, in Faeria Tales

To celebrate our progress over the last year, we’ve put together a little overview of Faeria’s journey through Early Access. We call it: Faeria Tales: The Road to 1.0.

Ever wonder how many eggs have hatched into Yaks? Curious as to who in the community has won the most prize money so far? Well, you’re in luck, because our Faeria Tales contain these interesting facts and many more!

As proud as we are of the last year and of Faeria version 1.0, we absolutely could not have done it without our many thousands of Early Access testers. You have contributed over 40,000 pieces of feedback that helped us improve the game - and those are just the pieces we can count! We extend a sincere thanks to each and every one of you. We couldn’t ask for a more amazingly friendly and supportive community that has formed around our game.

In Version 0.96 last month we introduced the first part of our new User Interface for both PC and iPad. Today we’ve added the finishing touches and applied some polish.

We first mentioned the intention to add Mythic Chests last year, and even gave some to a few of you that couldn’t yet be opened. Now they can, and you can even buy more! Mythic Chests are precious vessels that contain a range of cosmetic items as well as Mythic cards, with four objects in each chest.

Buying multiple chests at once

In the shop, we have restored the ability to buy more than one Battle Chest at a time, and have introduced new behind the scenes functionality which will allow us to offer regular rotations of cosmetic items, special offers and more. 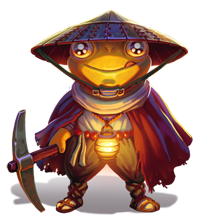 Fugoro’s nephew, Goki, is now available for hire from our shop, and he’s eager to mine you some gold.

We’ve replaced the Gold Fountain with this little guy, who offers a very similar service! You can hire Goki in the shop for the same price as the old Gold Fountain, and he too will give you an immediate reward of 5000 Gold. Goki will then mine for you each day for 30 days - he guarantees at least 300 Gold each day, and sometimes finds a LOT more!

He’s also generally a lot friendlier than the old Gold Fountains, who tended not to say very much. What we don’t know is how he manages to turn the gold he mines into coins so quickly…

Those of you who have an active Gold Fountain at the time of this update will have the remainder of their Gold Fountain time accelerated and will be compensated with the amount of Gold you would have received, so you may hire Goki right away if you'd like.

Finally, we complete the replacement of all placeholder art in Faeria, including the implementation of our last remaining multicolor epics. Behold: 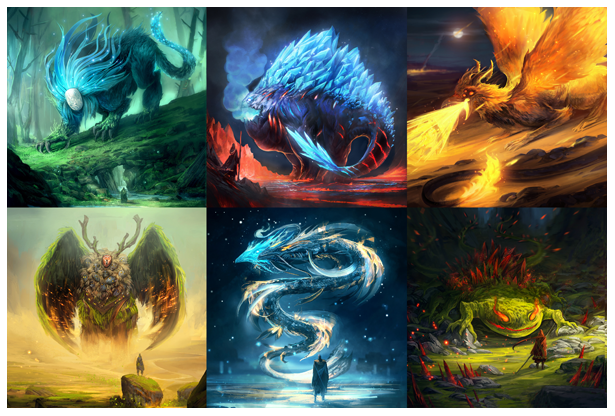 After testing in Belgium and Canada over the past couple of months, along with the help of several hundred community members in our iPad testing program, we are excited to roll-out Faeria for iPad globally, available now in your local App Store!

While it has been possible to play Faeria on Linux during Early Access, those of you that have tried it will know that it came with its fair share of crashes. Its for that reason that we’ve kept Linux labeled as officially 'unsupported’. However, that’s all changed. As of today you should now enjoy a smooth Faeria experience on Linux. Status change: Fully supported!

With tremendous effort from our community volunteers, we are pleased to apply a wave of localization improvements across the board for all languages. In no way could this have been possible without the help of our dedicated translators. We cannot thank these players enough, and hope you enjoy their improvements in helping make Faeria a global community.

We’ve implemented a wide variety of small improvements to in-game sound and animation, particularly in regards to combat. Oh, and you may want to keep an ear out for Ignus, Baeru, and the Dragons…

Just because we are leaving Early Access doesn’t mean we’re going to stop listening to the community for the best ways we can improve Faeria. We have big plans for even more new features and content in 2017, and are looking forward to hearing what you, our players, want to see. It goes without saying that we’ll be keeping an eye on bugs and balancing at all times.

One big thing we are working on is expansion onto more devices: as of today we officially support iPad and Linux players globally, and in the near future we will expand support to Android tablets as well as iPhones and Android phones.

What aren’t we telling you yet?

Oh, okay. You want more. You can tell we’re holding back. Fine.

In addition to Faeria on your phone being right around the corner, we’ve got some really incredible stuff coming your way. We’re just… not quite ready to spill the beans yet.

How about instead we mobilize a War Effort.