It's time you meet the Rakoa, a race native to the islands of the Oversky. Don't forget - season reset is this coming Monday! Also, we give a fond farewell to Dan.

You may have noticed a recurring theme in several of the previously revealed cards from the Oversky. Who are all those furry little creatures in the background? It's probably time that you meet the Rakoa. 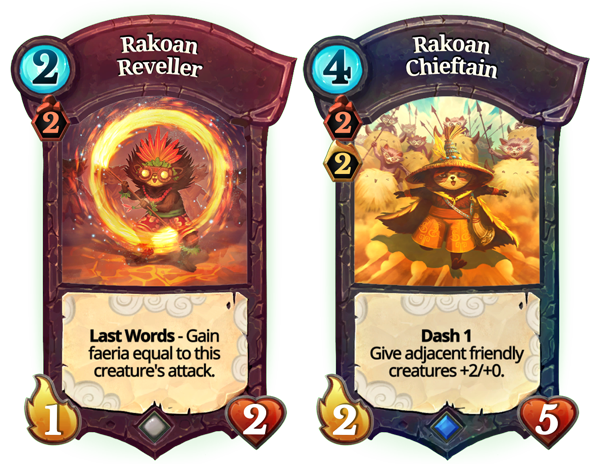 The Rakoa are a peaceful collection of various tribes, reveling in the wonder of the Oversky and exploring its shifting islands. They have a unique affinity with the elements, which is why you can find Rakoa in any color. While they do hunt and herd, the Oversky's abundance and ever-shifting geography has made conflict over territory pointless. As such, the Rakoa have no real concept of war and focus instead on exploration to bring wondrous stories and treasure home to their tribes.

You'll become quite familiar with them as you journey into the Oversky this summer, including the new Rakoan Reveller and Rakoan Chieftain.

Our Ranked and Pandora seasons reset on the first Monday of each month. This coming reset happens to be August 7th!

And of course... seasonal card backs!

Here you see Ranked card backs on the left, and Pandora on the right.

We'd like to wish a fond farewell to one of our game designers who will be leaving us next week.

Dan Felder has been with Abrakam for more than 2 years now, and has helped shaped much of the world in Faeria that you have come to know and love. Not only has he designed many of the cards you're familiar with, but he's constructed many of Jalmyr's puzzles, World Bosses, characters, and other quests. Dan will be moving back to America to work on Hearthstone with Blizzard, and we wish him the very best - we know he'll be a fantastic addition to their team!

Dan wanted to share a few words with the community on his departure and time with Abrakam:

"Hello fellow yak-lovers. Three years ago I met the lead designers on Faeria at a game developer’s conference in California. After bonding over our shared love of card games, they offered me a key to Faeria’s beta. I immediately fell in love with the game, and started sending endless suggestions for tweaking the card base and mechanics. Not ready to wait for digital updates, I cut out a paper prototype and printed the new designs on cards for physical playtesting. Here’s a picture of a few cards from those early prototypes...." 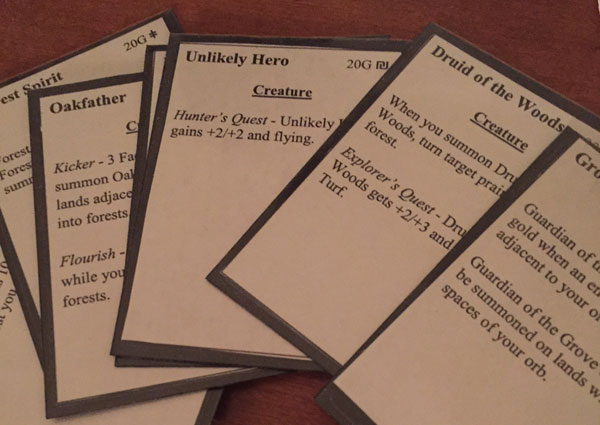 Schedule for this weekend:

Remember, if you don't see your favorite player on the list, you need only type their name in the search box to find them. As mentioned in our forum post here, Lyakusha will be ceding their spot to the next in line.

After several months of league play, the Faeria Team Leage is preparing for its grand final this Sunday!

Don't miss Team Equilibrium square off against MetagamingTV for the first ever Faeria Team League title.

Winner gets their team emoji to stay on our Discord channel!

Deals of the Week

The following items are available to purchase in the shop this week.

Guides this week are decidedly a shade of chartreuse.