We are applying an incredible update to Faeria today. Read on for more, there is a lot to take in!

Over two months ago, we released a look at The Road Ahead and our development plans on the path out of Early Access. On the 24th of August, Version 0.8 was released, and Faeria went "Free-to-Play."

Many aspects of this update reflect changes you have been asking for.

This is the last major release before version 1.0, which will coincide with the exit of Steam Early Access for Faeria.

Let’s get right into what we’ve been working on and are eager to share with you.

We’ve introduced our reasoning behind this a few weeks ago, and have since released a FAQ going into more detail on the many questions players had about this major change. Please read these articles if you haven’t already for why we had to make this difficult decision. Thank you for your understanding.

When we introduced the ability to spectate private lobbies several months ago, we mentioned we’d be expanding this feature in the future. The future is now.

You may now simply select anyone in your friends list who is playing a game and be able to jump right in to spectating them. Of course, we’ve also provided an option on your social menu to disable this if you prefer your battles to be more private.

During competitive tournaments, this feature will be automatically disabled when playing games through tournament lobbies.

One of our most requested features, you will now be able to communicate to your opponents as well - in emote form!

Note that this is the first iteration of the emote system, and we plan on expanding it in the future.

How do they work?

Every player, by default, receives the base set of 5 standard emotes. When you go to your profile screen you will see the list of these: 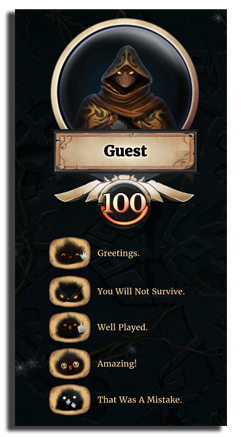 You can use your emotes by clicking on your orb during a game.

Want your opponents to remain quiet? No problem. There’s an option in the settings menu to mute all emotes. 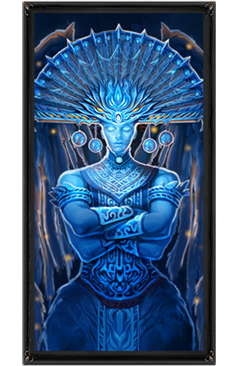 One of the most overwhelmingly popular aspects of our new Solo content has been Jalmyr’s selection of mind-bending Puzzles. Who are we to say no? Have some more!

This is something we knew we needed to implement as soon as possible, based on your feedback. Now you’ll be able to replay some of your favorite puzzles and quests, for fun! (However, rewards will not be given for replaying Single Player games.)

Battle Chests are much like Booster Packs, with the exception of two key differences

1) You’ll have the unique ability to reroll the card of the highest rarity.

We are lowering the amount of Gold given by the Gold Fountain, to fit better with the value of our other in-game economic changes. It will now give 500 Gold on purchase, plus 40 Gold every day for 30 days - to give you a total of 1700 Gold. This still represents fantastic value, and you’ll be able to buy plenty with it in our improved shop!

Due to this change, all players with an active Gold Fountain at the time of this update will receive the total amount of Gold still owed by that Fountain, immediately now, at the old rate - so for example if you have 10 days left for your Gold Fountain, you will receive 10x60 = 600 Gold.

We’ve been wanting to overhaul the in game shop for some time, and there’s no better time than now. It should be much easier to navigate now and more logically organised. This will allow us to provide a large amount of cosmetic items without overwhelming you with them all in one screen. Speaking of which…

A wider variety of purchasable cosmetics has been something both ourselves and our players have wanted for some time. Not only do we have new Avatars and Orbs available, but you may now acquire and customise Wells, Card backs, and our new Emotes! Keep an eye out for more arriving in the near future…

Offering better value for money than buying each item separately, our Character Sets will include a beautifully matching avatar, orb, card back, well, and emote collection. The first three sets available are Aurora, Seifer, and Sharra.

Please note: Right now, anyone who buys a Set will be charged the full price. In the future we plan to modify this so that if you already own an item in a set (for example, you own the avatar but nothing else) you will see a price for the Set which removes 80% of the cost of any already-owned item. We won’t be able to retroactively provide this discount - so make sure to wait for it if that’s what you desire.

The lovely golden Mythic Chests will contain a random selection of gorgeous cosmetics. Those of you who have previously purchased the Core Set will receive a free Mythic Starter Pack instead of a Battle Starter Pack with this update, however Mythic Chests are not yet available to buy, nor can they be opened right now if you receive one for free. Soon we will be bringing more cosmetics into the game and offering Mythic Chests to all!

Now available in the shop is the Battle Starter Pack, soon to be joined by the Mythic Starter Pack. Starter Packs are designed to give new players a head start, offering double the value compared to normal purchases of Chests. Each player can only ever buy one of each type of Starter Pack - and this includes the free ones we are giving away with this update, so whichever type you receive today you will not be able to buy another of.

The maximum player level is no longer capped at 30. There is now no upper limit to how high you can progress! Every time you advance one hundred levels, the speed at which you level up resets back to how it was at the start.

For example, it takes the same amount of experience to progress through levels 101 to 110 as it does for levels 1–10.

Note that previously we described this as a tiered system whereby each 100 levels would be numbered starting again from 1. While it will still function the same way, we have kept it more simple in this release. For now, you will simply be level “205” instead of level 5 in the third “league”, for example.

Each time you progress to a new level, you will be shown three cards of a certain rarity which you don’t currently own the maximum number of, and be able to choose one to keep. If you have all the cards of a rarity and happen to receive a card from that rarity for leveling up, you will receive compensation in gold instead of a card.

We have updated our experience system to take into account more things that happen during the course of a game. This means that even if you lose, you may gain a decent amount of experience based on how you performed and the actions you completed.

The requirements to complete each Daily Quest have been reduced across the board. The rewards for completion have been slightly reduced in compensation of this, but should still be very generous.

As mentioned in our Improving Pandora post, Pandora is going through some major changes. Not only are we changing the ranking system, run length, and run rewards, but we’ll be adjusting some of the existing treasures and basic mechanics of Pandora opening as well.

We’ve based the Pandora balance changes not only on player feedback, but our own data collecting and observations.

To keep this post as short as possible, a full rundown of all the Pandora balance changes can be found on our forums here.

The temporary placeholder which was a carbon copy of the constructed Ranked system has been completely removed and replaced by Pandora Points. You accumulate Pandora Points, or PP, based on your total number of wins in a single run. You cannot lose Pandora Points.

You can track the highest amount of Pandora Points on our esports website, which you can find here.

Pandora points are not taken into account for matchmaking.

We’ve reduced the number of total wins you need before your run is “maxed out,” and made the rewards generally more appealing. When your run is over, you will now be awarded the following:

We will have a brand new section on our website dedicated entirely to the new Pandora seasonal reward system, which will go live later today.

We’ve been observing games, gathering feedback, and watching competitive tournaments. Whenever we make balance changes, we like to ensure they are truly necessary or will push the game in a positive or healthy direction.

One important change we are making is not a change to a card, but a change to the fundamental mechanics of the game:

To keep this post as short as possible, a full rundown of all the balance changes can be found on our forums here.

We have been hard at work improving Faeria’s overall performance. You should see lower CPU and memory usage in general.

Several animations in the game are either new or improved in version 0.9. Examples include a new scene for opening Battle Chests and more interesting highlights and animations when uncovering new cards. Legendary cards will now be highlighted and celebrated when discovered.

We’ve added a new shore, or in-game background, into the random rotation for your games! See if you can spot it.

To keep this post as short as possible, a full rundown of all the bug fixes can be found on our forums here. Today's update is a big one so we appreciate your help reporting any new bugs you might find.

We hope you enjoy all of these changes and improvements we’ve put together for you in this major patch. Many of these new features were shifted into high priority due to the large amounts of player feedback we are happy to continually receive.

As announced previously, we are also giving every eligible player some free gifts as part of this update, as a thank-you for your helping us shape Faeria during Early Access. If you have not purchased the Core Set while it was available, you will receive the Battle Starter Pack, while Core Set buyers will receive a Mythic Starter Pack instead. Everyone will also receive a Gold Fountain for free, so start thinking about what to spend your Gold on! (You must have already finished the prologue - the first six Solo missions - by the time of this update to receive these gifts.)

Thank you, and let us know what you think!