An overview of popular deck archetypes in Faeria.

Decks in faeria are divided into archetypes, which determines the overall strategy the deck uses to win. In this guide, I'll explain each archetype, show examples of each and give deckbuilding tips. 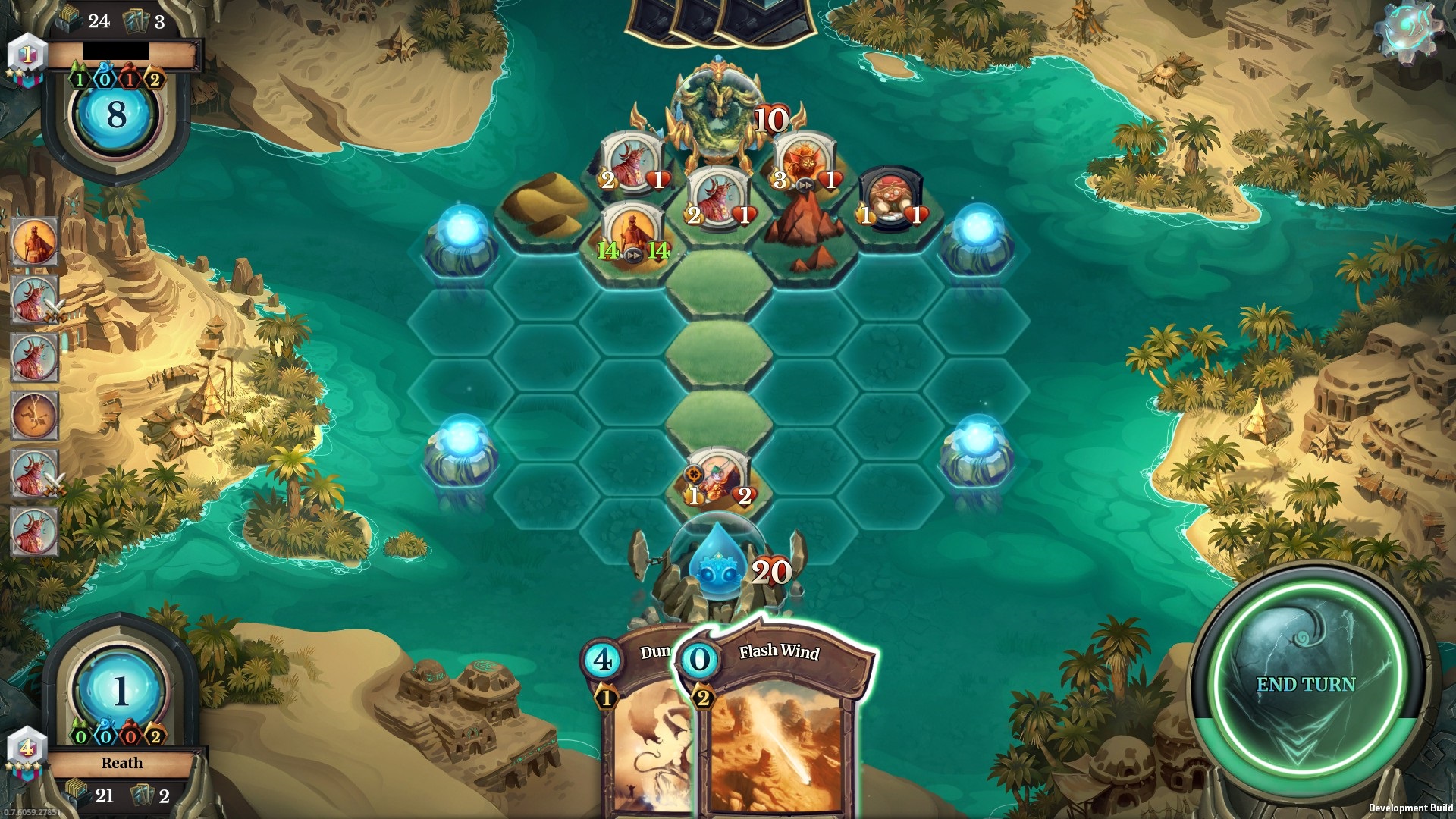 Rush decks, sometimes called aggro decks, win by finishing off their opponent quickly. They build lands directly towards their opponent and agressively attack their opponent. This doesn't mean they'll attack the orb no matter what. Sometimes it's better to kill faeria gatherers instead, so their opponent has less resources to defend themselves.

Rush decks are strong against greedy decks, which need time to prepare before they can fight efficiently. Decks with early game defenses, such as taunts, cheap removal and durable faeria gatherers, have a good chance to win against rush decks. 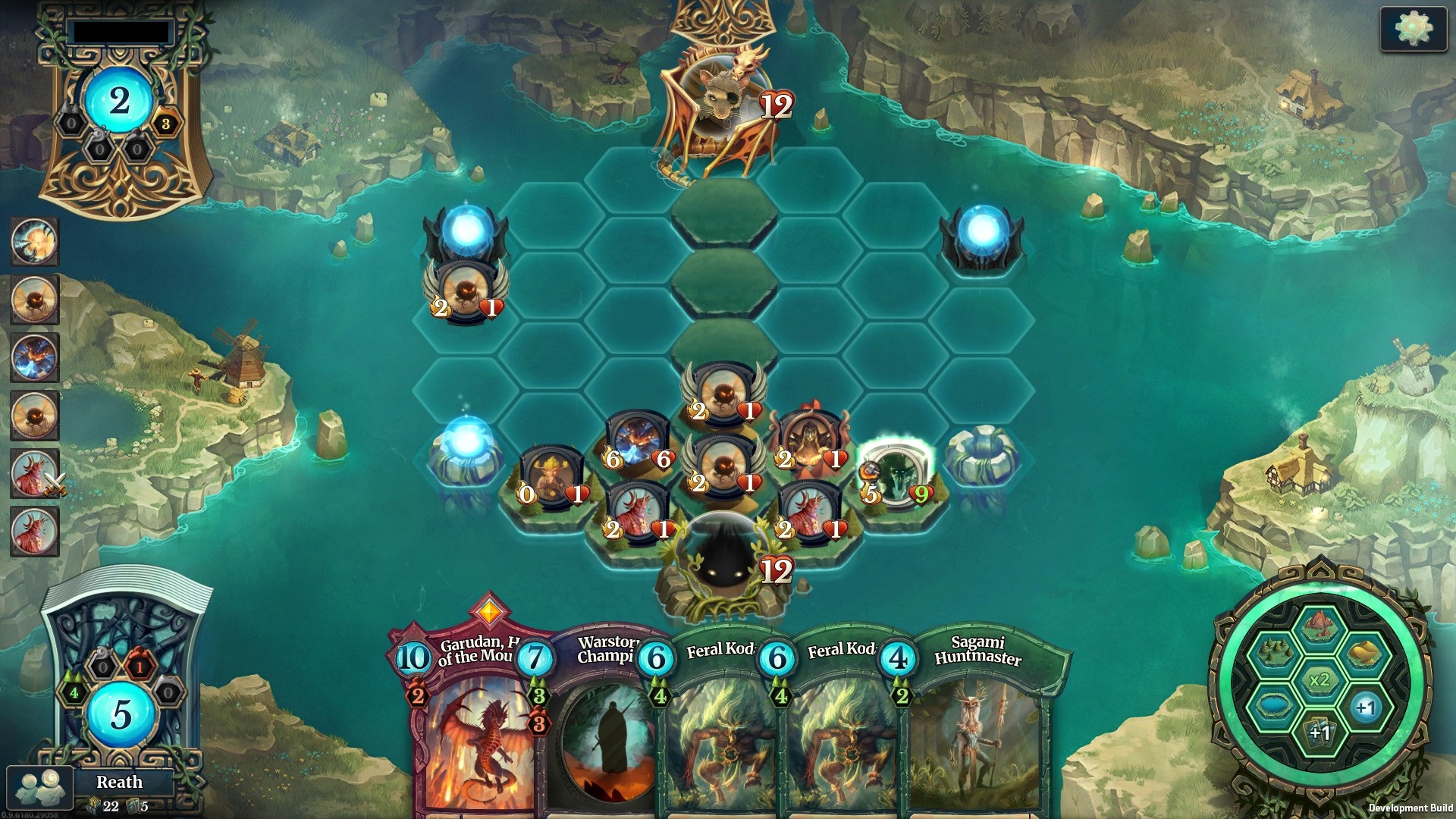 To build good rush decks, using a lot of early game creatures allows the rush player to start their agression early. It's best to attack before the opponent has a chance to prepare their defences, making strong and cheap creatures useful. 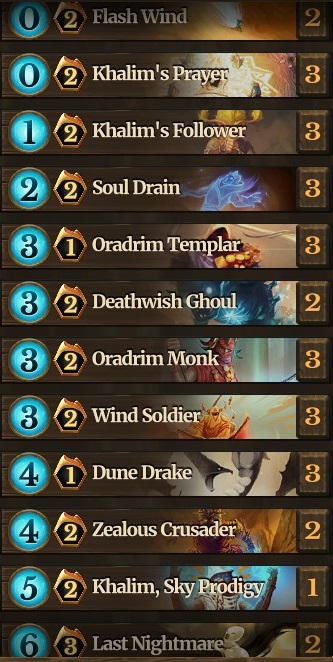 This variant of Yellow Rush constantly attacks the orb to gain extra faeria from Khalim's Prayer and to buff their Zealous Crusader. Zealous Crusaders are used as finishers if necessary. 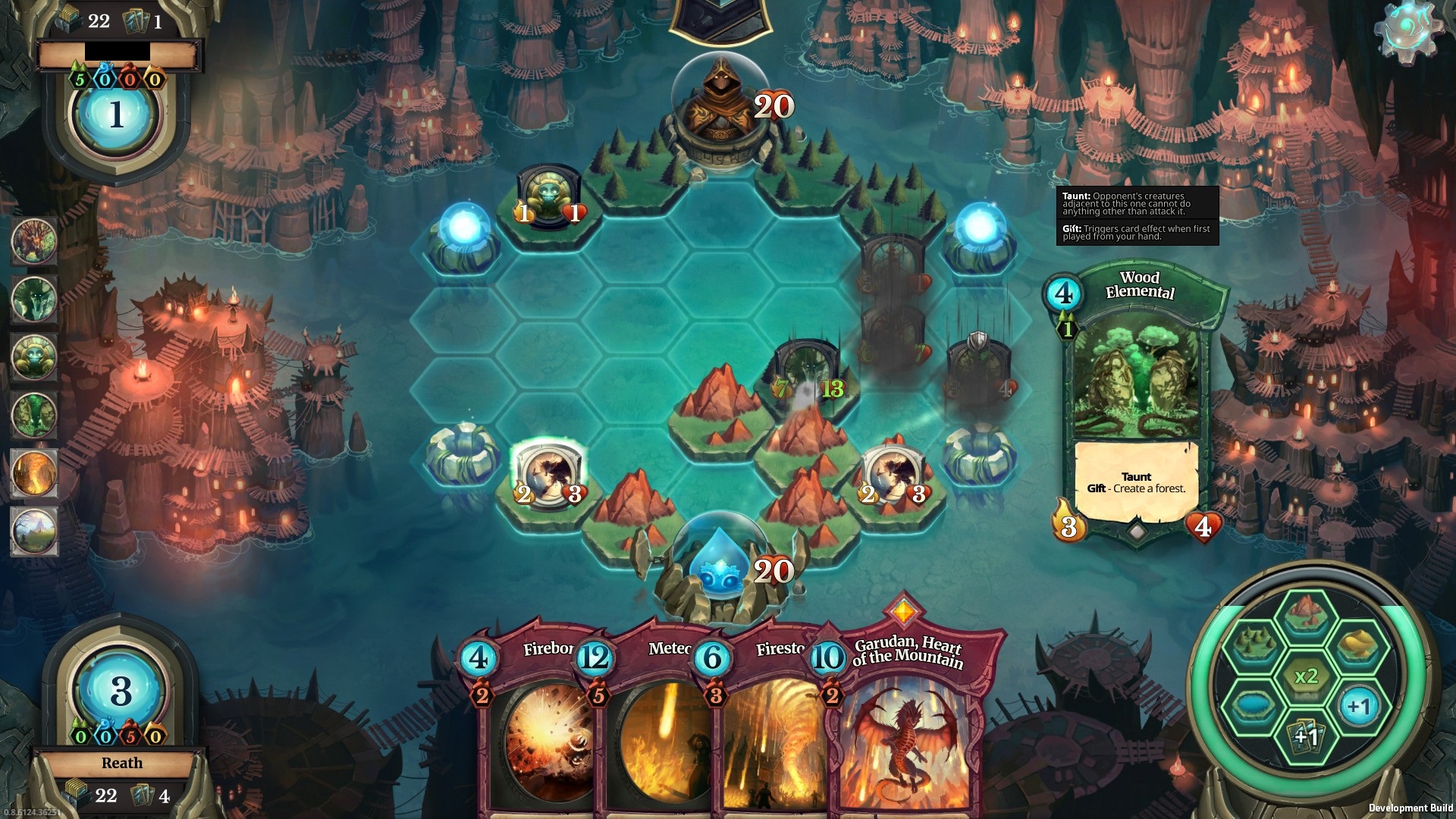 Control decks win by removing their opponent's threats until they run out of resources, while collecting faeria themselves. Once their opponent no longer has any resources left, they switch to aggression and finish off their opponent. They tend to have the longest matches, as the playstyle requires patiently responding to what their opponent does.

Control decks generally do well against rush decks, as they can stop their agression with ease. They're weak against slow and greedy decks, which become so strong that control runs out of ways to stop them. 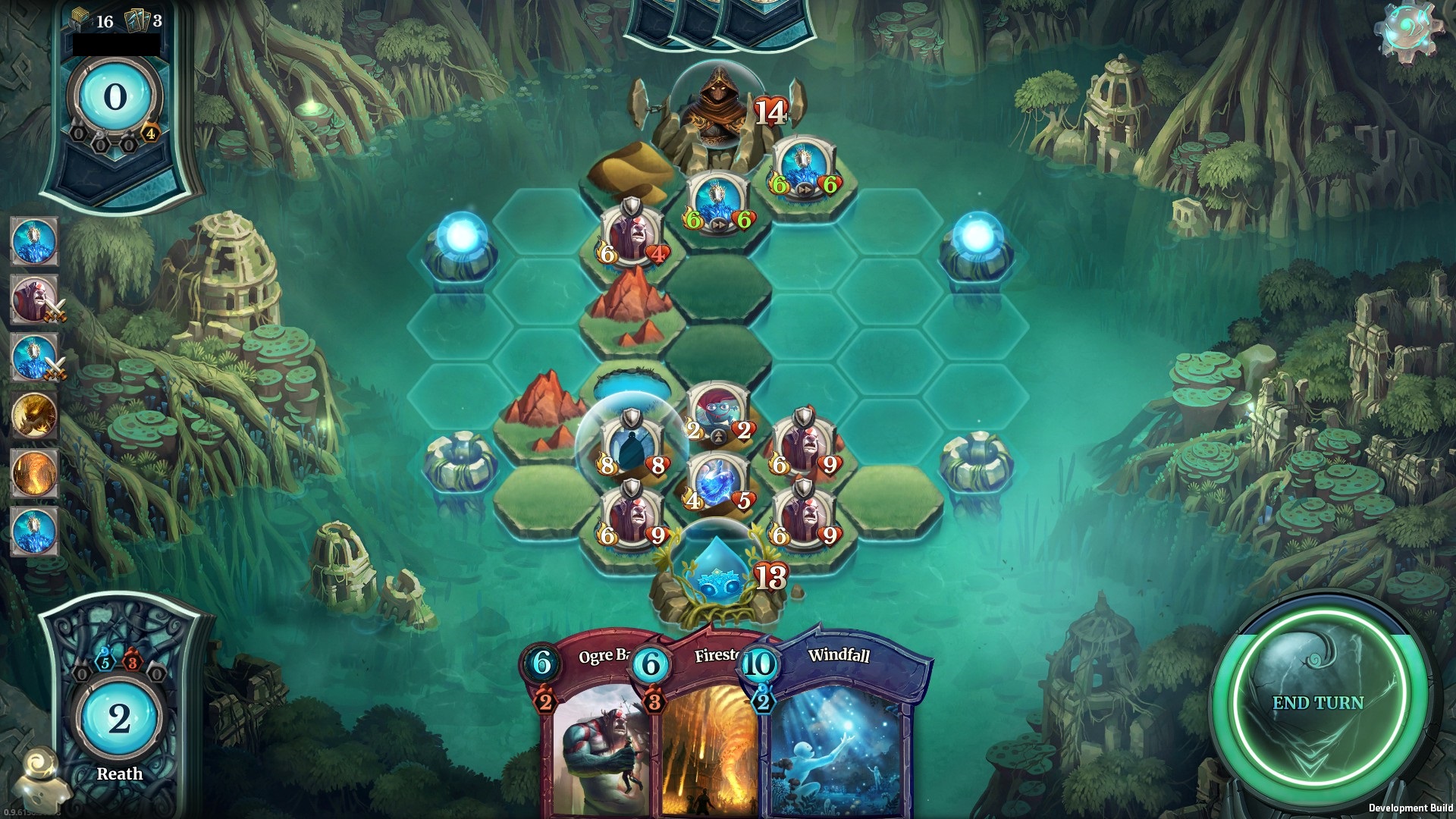 While building control decks, consider what kinds of threats are used in popular decks. Include efficient ways to remove those threats, along with hard to remove faeria gatherers. Control decks also need a few strong late game creatures to finish off your opponent.

Yellow Control seeks to kill its opponent creatures efficiently, using both damage based and hard removal to clear any threats. The movement tricks can be used to change the positioning of the creatures to their advantage. 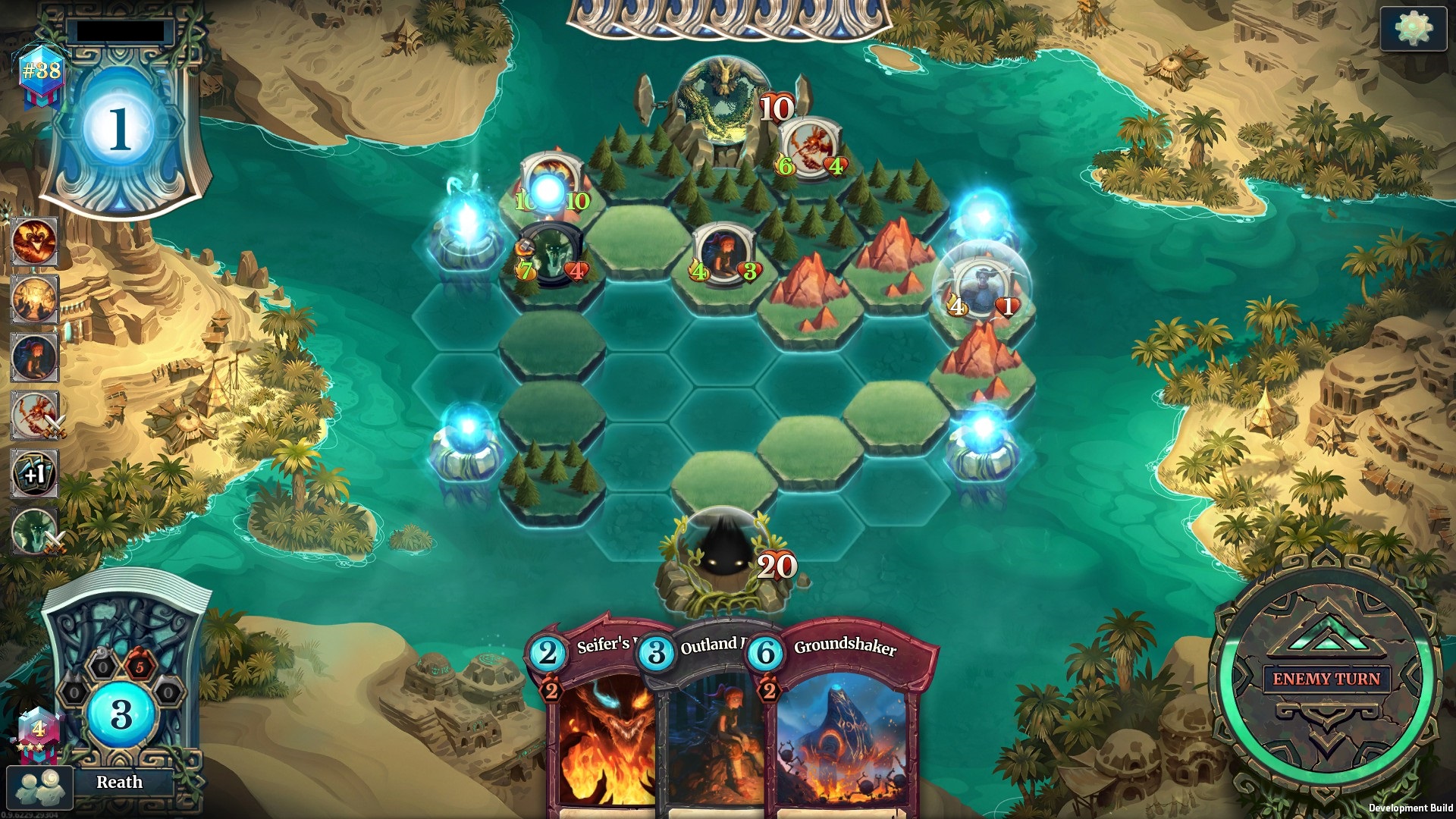 Midrange decks are the middle ground between rush and control. They're flexible enough that they can play more defensively or aggressively as necessary. Their aim is to outvalue the opponent, efficiently killing creatures while collecting more faeria than their opponent. Once they have better board control, they play more aggressively to finish the match.

These decks don't have any innate strengths or weaknesses. They're dependant on the colors and deck being played themselves. 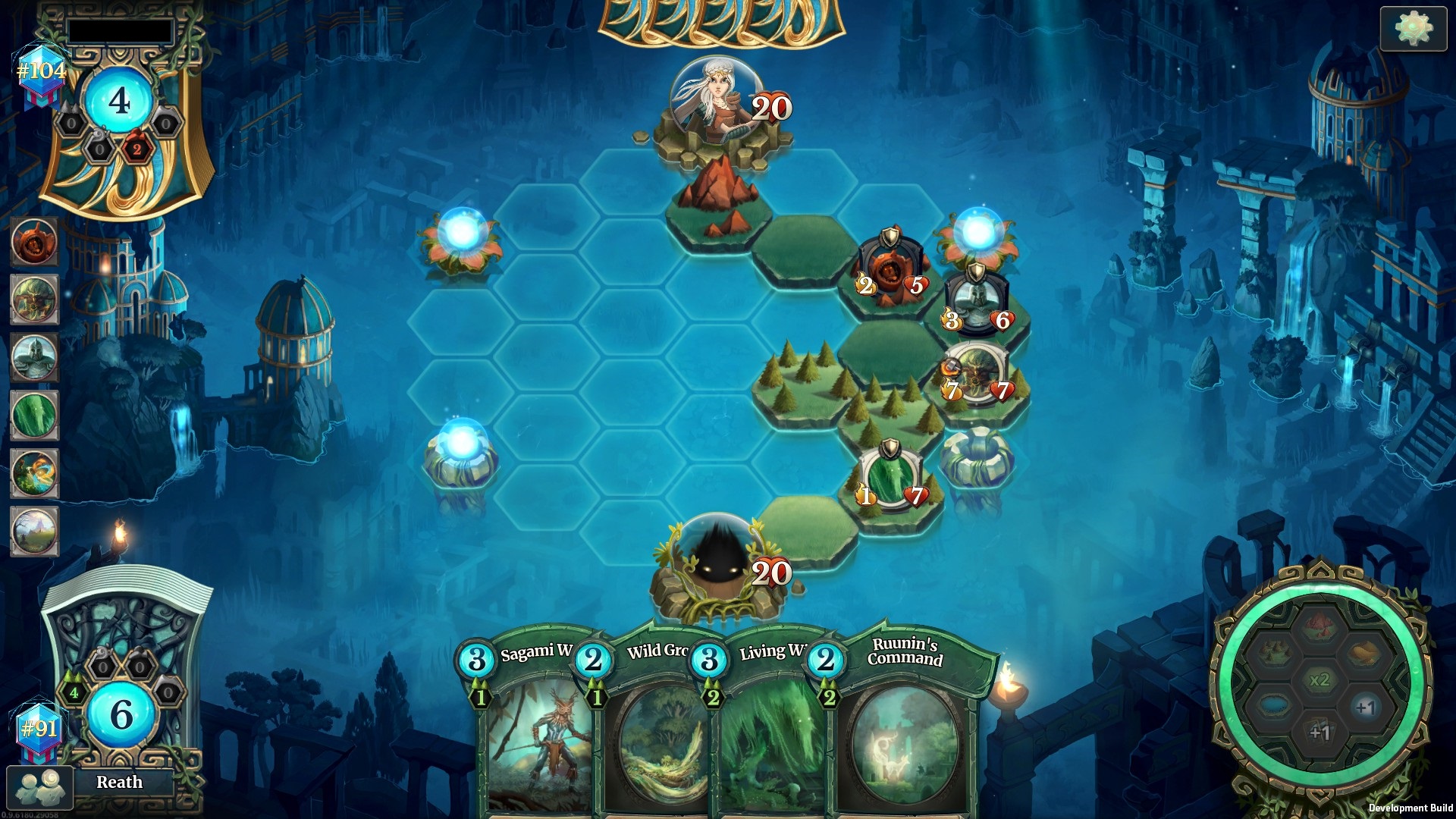 Consider how to make the most efficient use of faeria while creating midrange decks. Movement tricks are useful additions, as they allow making efficient trades via surprise attacks. 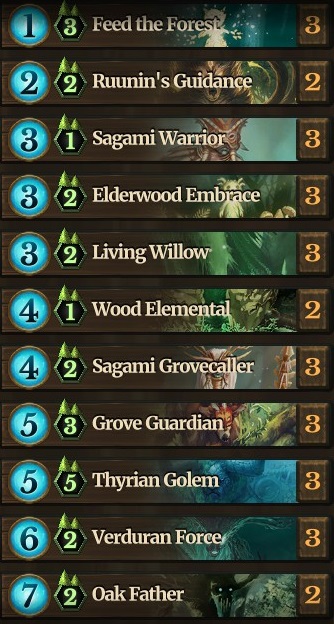 Green Midrange uses creatures that have efficient stats to overpower the board. Its creatures are hard to kill, allowing them to remain on the board for a long time. Sagami Grovecaller can be used for surprise attacks. 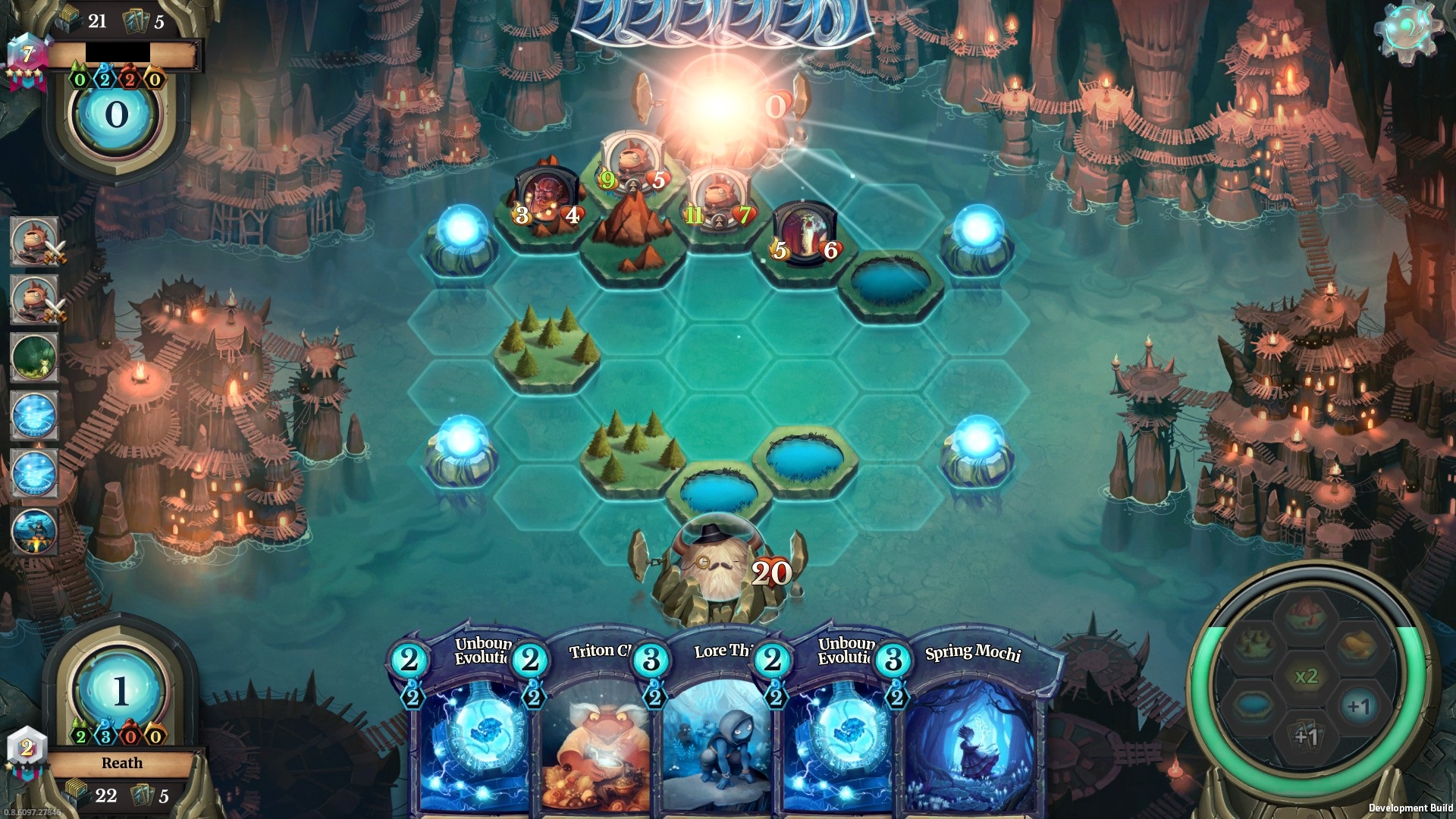 Combo decks use combinations of cards to get more value out of them than you would get by using them individually. This type is quite rare in faeria, but there are some of them. Their dependance on specific combos varies.

Making combo decks requires creativity. Consider how the cards interact with each other and look for synergies that allow you to get the most out of combinations of cards. 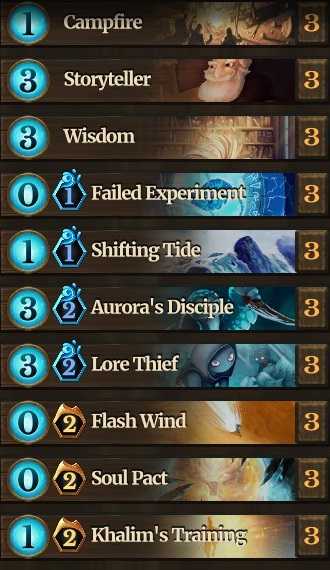 Disciple OTK wins by comboing Aurora's Disciple with all the event cards in the deck. The whole deck is built around this one combo. 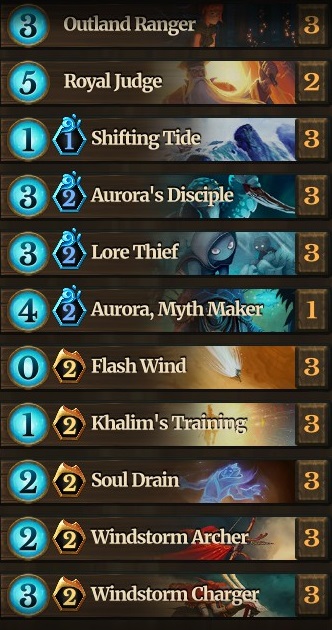 Blue yellow events is less all in on combos. It has cards that get buffs from playing events, along with many cheap events. By making clever use of combos, it can accomplish a lot with only one event.

Burn decks use direct damage to the orb to win the match. Certain cards can deal unavoidable damage to the opponent, allowing burn decks to defeat their opponent from a distance. Burn can be used as a main win condition, or a secondary one.

Burn is the strongest against slow decks that take too long to finish off their opponent. Their main weakness is rush decks, which can kill them before they have time to burn their opponent. Healing is also very strong against burn, as it delays their win condition.

Consider how important winning via burn is while making burn decks. Creatures that deal direct damage have inefficient stats, meaning the more of them are included, the worse the deck is at contesting the board. 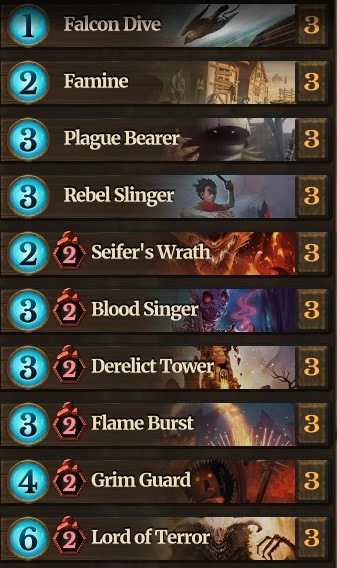 Lord of Terror Burn is a combo burn deck that wins by playing a Lord of Terror, then damaging it to deal direct damage to the opponent. This deck is all in on winning with burn damage.

This Red Yellow Burn deck uses a midrange strategy. It controls one side of the board, while constantly dealing damage to the opponent. Burn is used as a secondary win condition in this deck, as it can finish off its opponent by directly attacking the orb too. 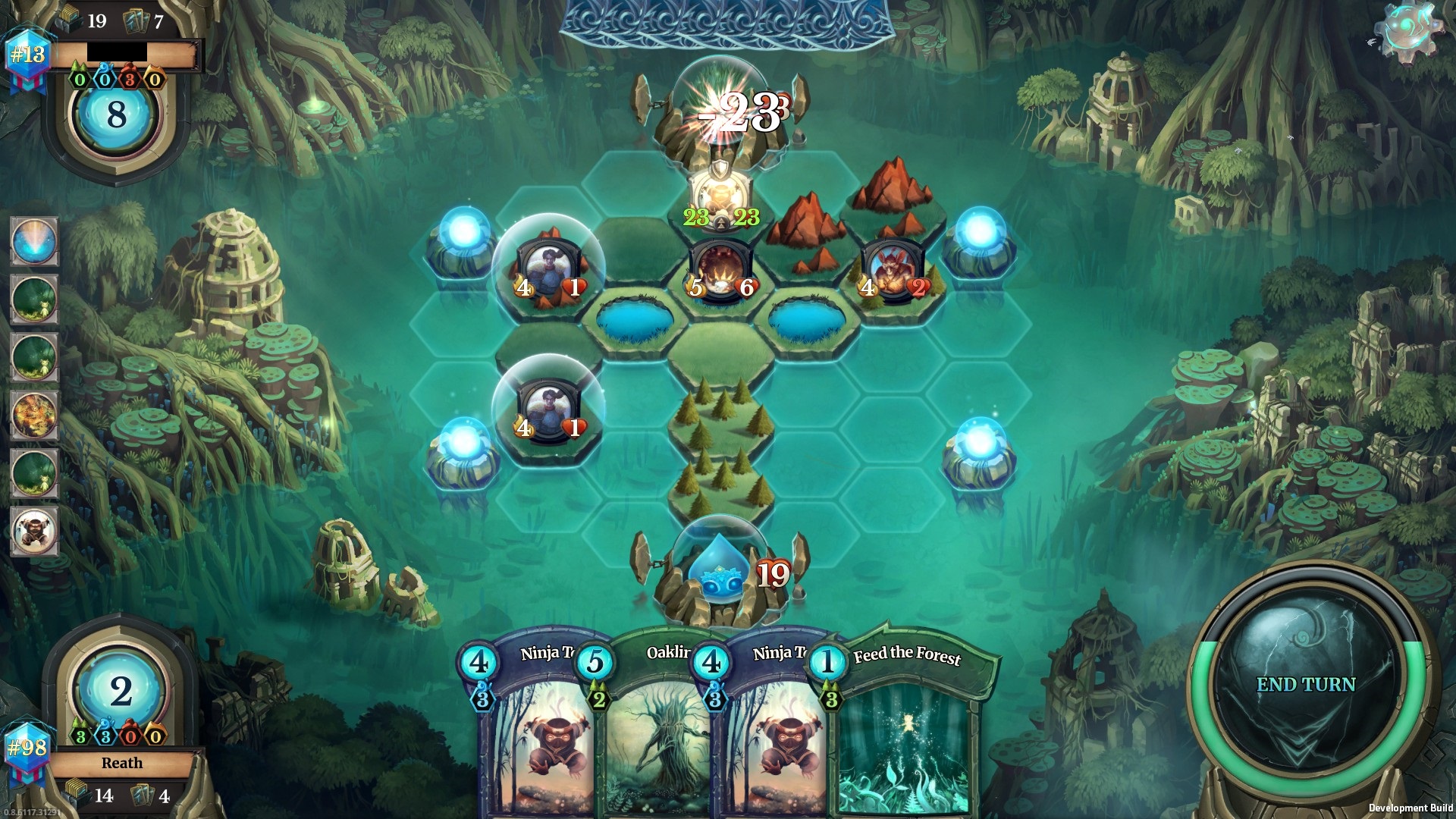 These kinds of decks save up cards and faeria until they can kill their opponent in one large burst of damage, utilizing a certain combination of cards. They often include a lot of card draw to ensure they get their combo pieces more reliably.

OTK decks can win against many decks if they get great cards draw. However, they're unreliable since they need specific cards to win and the required creatures in some decks can be removed before they get to attack.

OTK works the best against slow decks that give OTK enough time to gather the required resources. They're weak against rush decks and decks that have tools to counter their combo. 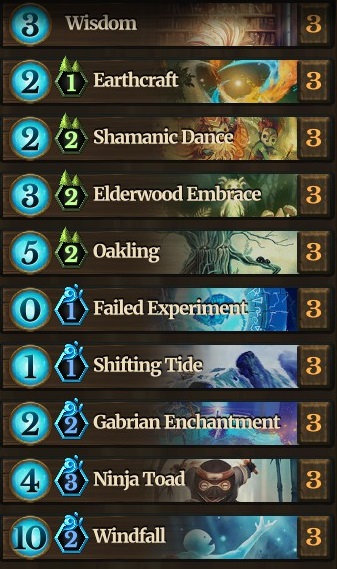 Toad OTK wins by buffing a single Ninja Toad with a lot of buffs until it has 20 attack, then using it to kill their opponent in one hit. 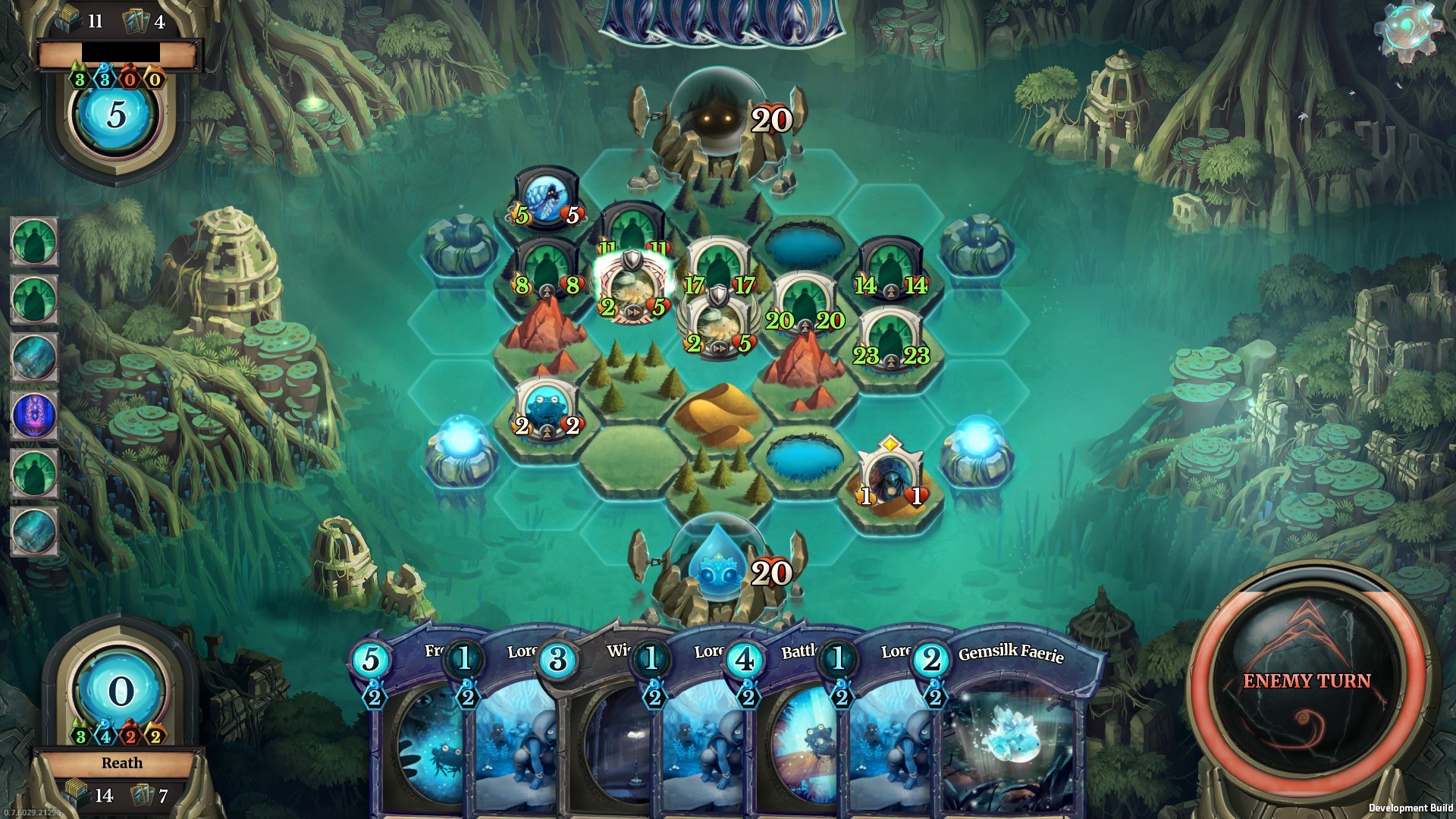 A very broad archetype built around the card Three Wishes. These are 2-4 color decks that use the cheap cards from Three Wishes to gain an advantage over their opponent. The high land requirement prevents the card from being used in fast decks, so wish decks are usually control decks. Earthcraft is always included in decks, as it speeds up land development a lot.

Wish decks vary a lot in their construction, so their weaknesses depend on the individual deck. Land destruction and transformation can be used to slow down their win condition.

Consider including ways to stall out the match while making wish decks, to ensure the player has enough time to meet the card's land requirement. 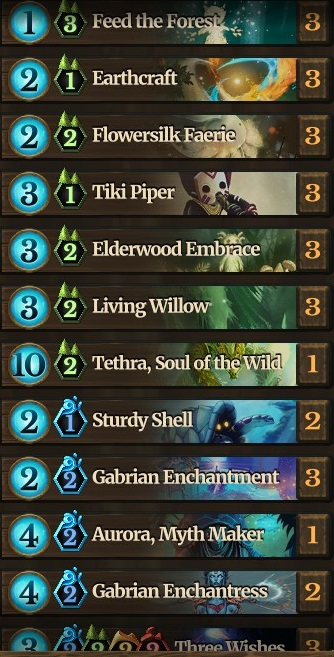 Gabrian Wishes uses high health creatures to collect faeria and contest the board as it prepares to play Three Wishes. 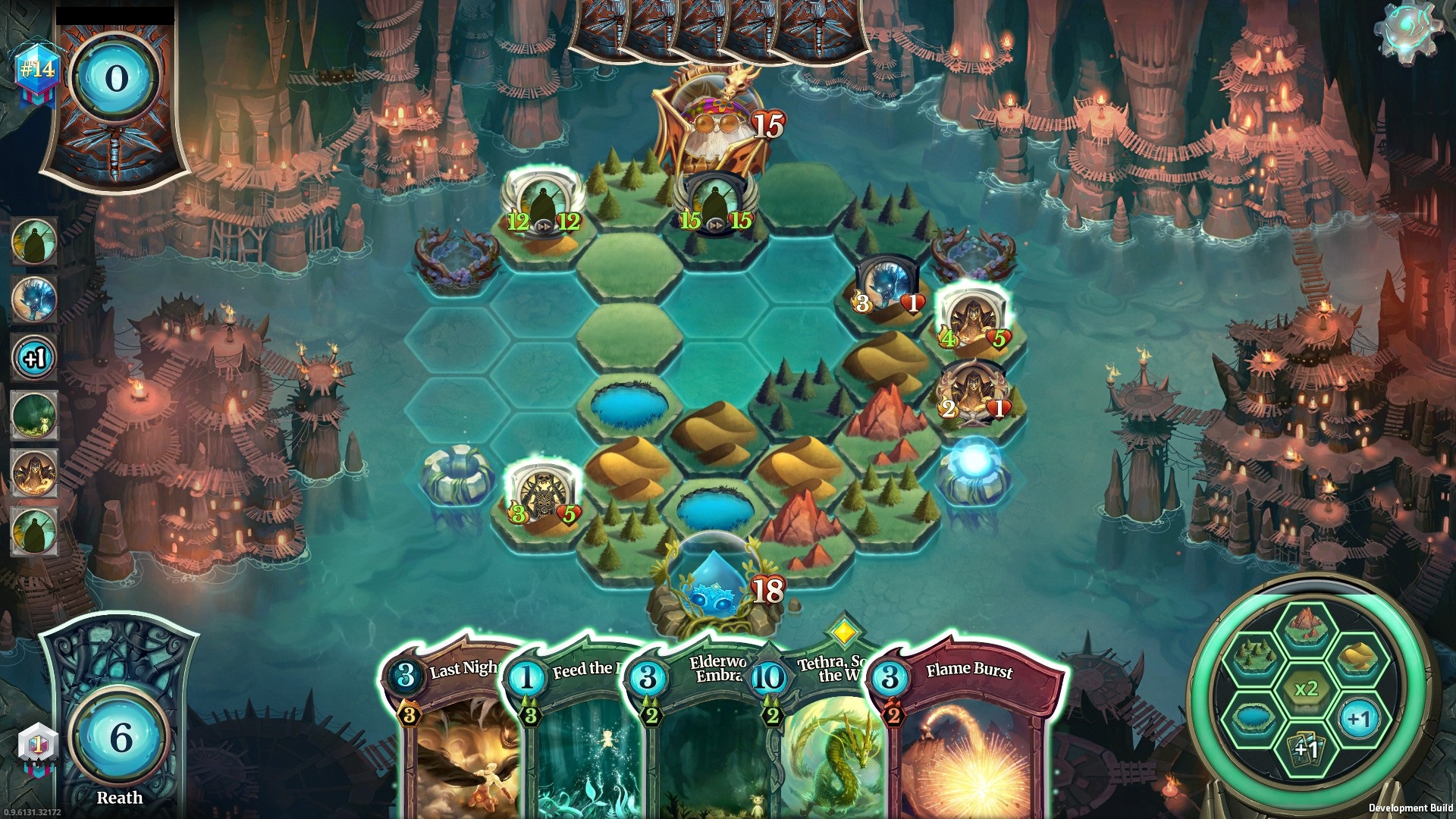 Sacrifice decks are almost always green and yellow. They're built around the card Soul Eater, which gains buffs each time a creature dies. By combining creatures with strong last words with creatures that sacrifice a creature, they can generate a lot of value while buffing their finisher.

Sacrifice decks are strong against rush decks, as they have early game creatures that can easily fend off agression. They rely on Soul Eaters to finish off their opponent, making them weak against decks that can kill or transform them easily. 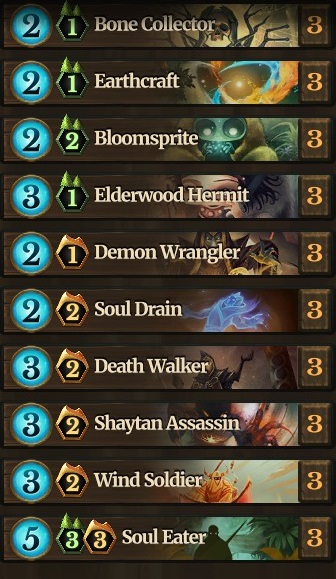 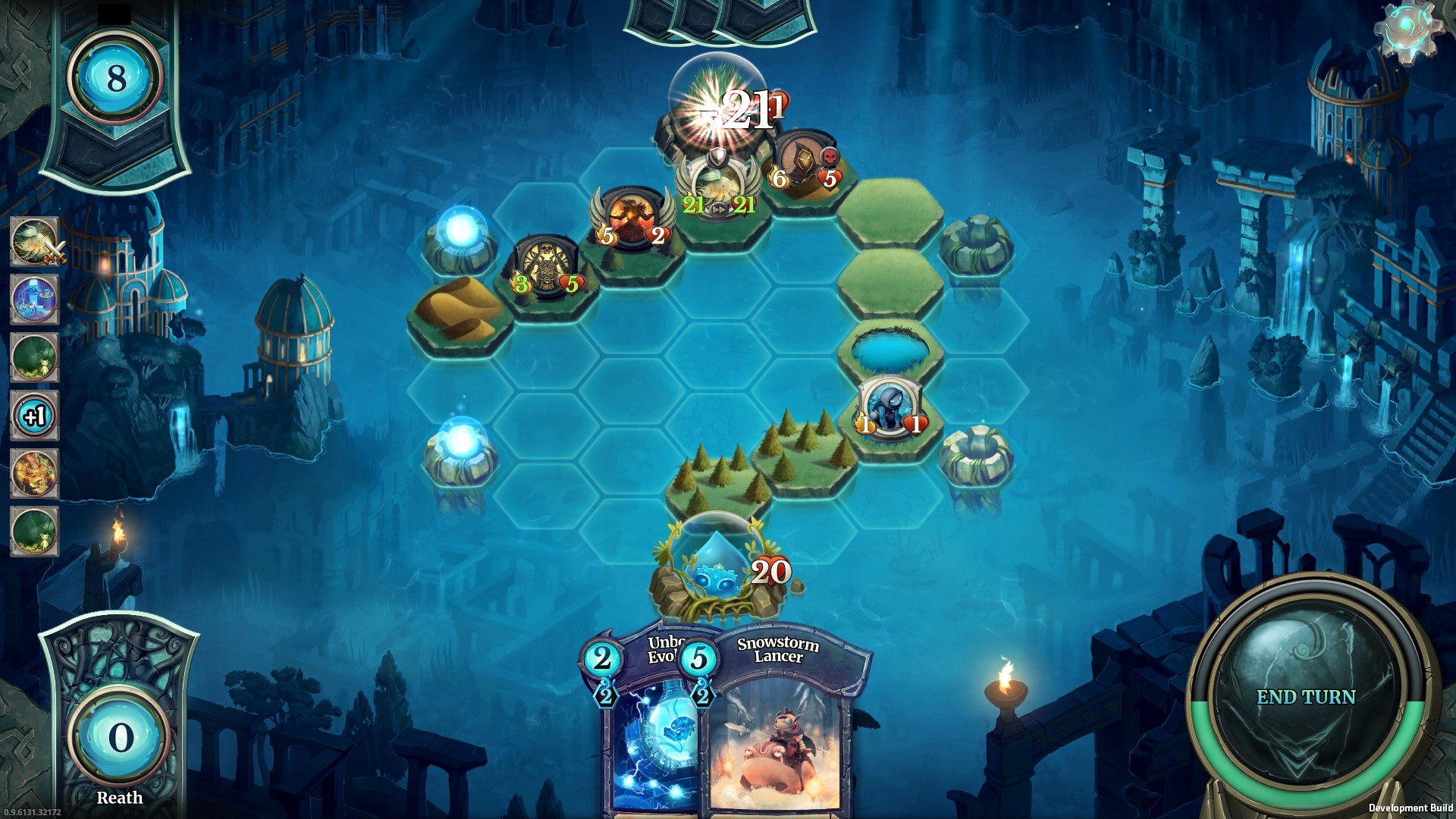 Enchantment decks use high health, low attack creatures along with cards that make the creature's attack equal to their health. They can play cheap, durable creatures, then buff their attack to kill creatures as necessary.

The finishers used vary. Some decks use Apex Predator, which gets very high stats when used on an enchanted creature. Three Wishes is sometimes used. Certain decks lack a dedicated finisher and simply rely on using their enchanted creatures to finish off their opponent. 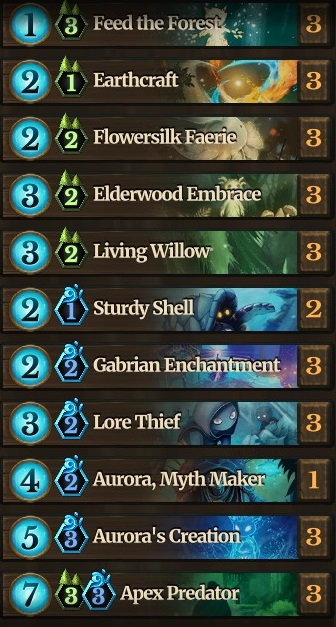 An enchantment deck that uses Apex Predator as a finisher.