What are the odds? Crackthorning around.

In game two of the Grand Finals in Monthly Cup XI, Maihem plays what seems likely to be a game-winning Crackthorn Beast. But just how likely was it?

In game two of the Grand Finals in Monthly Cup XI, Maihem plays what seems likely to be a game-winning Crackthorn Beast. But just how likely was it?

We need to go deeper.

First, let's take a look at the clip here:

In the final stages of the game, Maihem is left in an interesting position.

Here is the board state right before the Crackthorn was played: 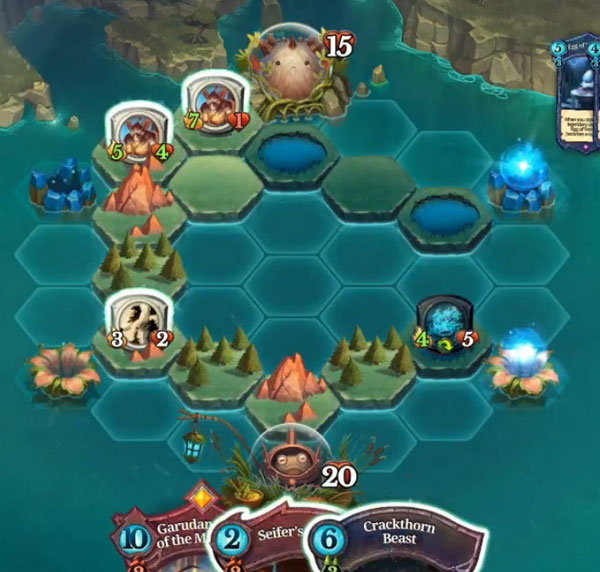 You can see that Maihem has two Axegrinders totalling 12 damage ready to strike at Kumpel's 15 remaining life. He also has a Horsemaster sitting out of range. KumpelKefer has only a 5 health Mystic Beast on board. 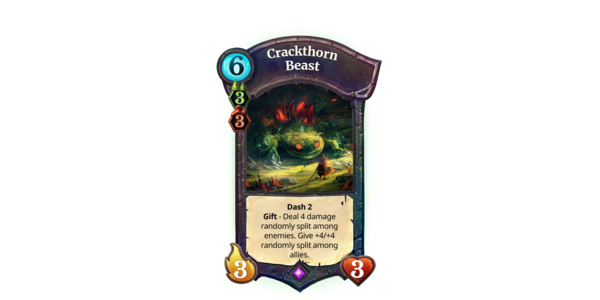 Suddenly, this guy gets plopped on to the field.

How do we know how likely it is for lethal to be achieved here?

First of all, let's remember that Crackthorn Beast has a chance to buff itself. This means that each of Crackthorn's +1/+1's has four potential targets. Two of those targets are in range of the enemy orb and ready to attack.

On the other hand, each of Crackthorn's 1 damage rolls has only two potential targets: Mystic Beast or face.

All that needs to happen is for three extra damage to make its way onto the opponent orb to pull the win here - whether by buffing either Axegrinder, or by hitting the face directly. That's 8 total chances, right?

We need to consult our friend: Mr. Probability Tree.

Probability trees are useful tools to determine multiple successive outcomes involving chance. It's most easily illustrated by the example of flipping a coin twice and predicting the results:

(Credit to mathisfun.com for the above image)

At their simplest level, you need only continue branching out each potential outcome until you're left with a series of probabilities. By following a branch of a completed tree to its end, you can multiply the chance of each branch to figure out the probability that outcome will present itself.

In the case of flipping a coin twice, you have an equal 25% chance of any of the four potential outcomes:

Crackthorn, of course, is much more complicated than that. I've made a series of terrible images to demonstrate this.

In this case, I have drawn out a probability tree for this specific scenario. 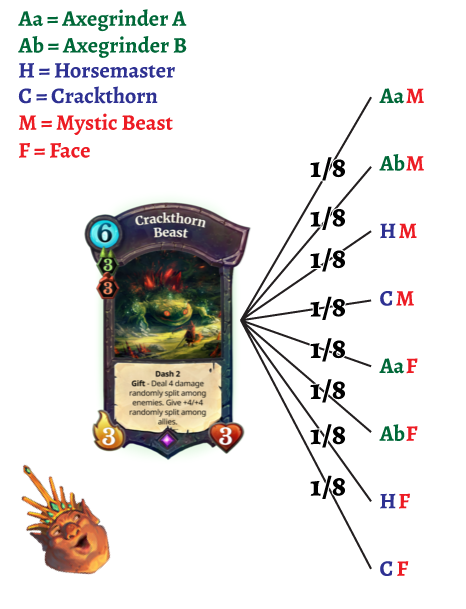 Here I have abbreviated each possible outcome for both buffs and damage. We'll consider each "wave" of the Crackthorn ability to produce one +1/+1 buff, and one 1 damage ping.

With four potential buff targets and two potential damage targets, we end up with 8 possibilities for the first wave of damage. That means each potential outcome has a 1/8 chance of occurring.

Let's find a way to simplify it.

This would shrink our probability tree to only four potential outcomes each wave:

Tracing this out after four waves, we'd then only be left with 256 (4^4) potential outcomes.

We're getting somewhere! But it's still too complicated...

What if we consider each possibility to represent a certain amount of damage to the orb?

This is looking like something we can work with. Four waves of three results is only 81 (3^4) possibilities! This is made a lot easier by the fact that Mystic Beast can never possibly be destroyed.

The only thing left for us to do is to draw it all out while watching day two of E3 on Twitch. 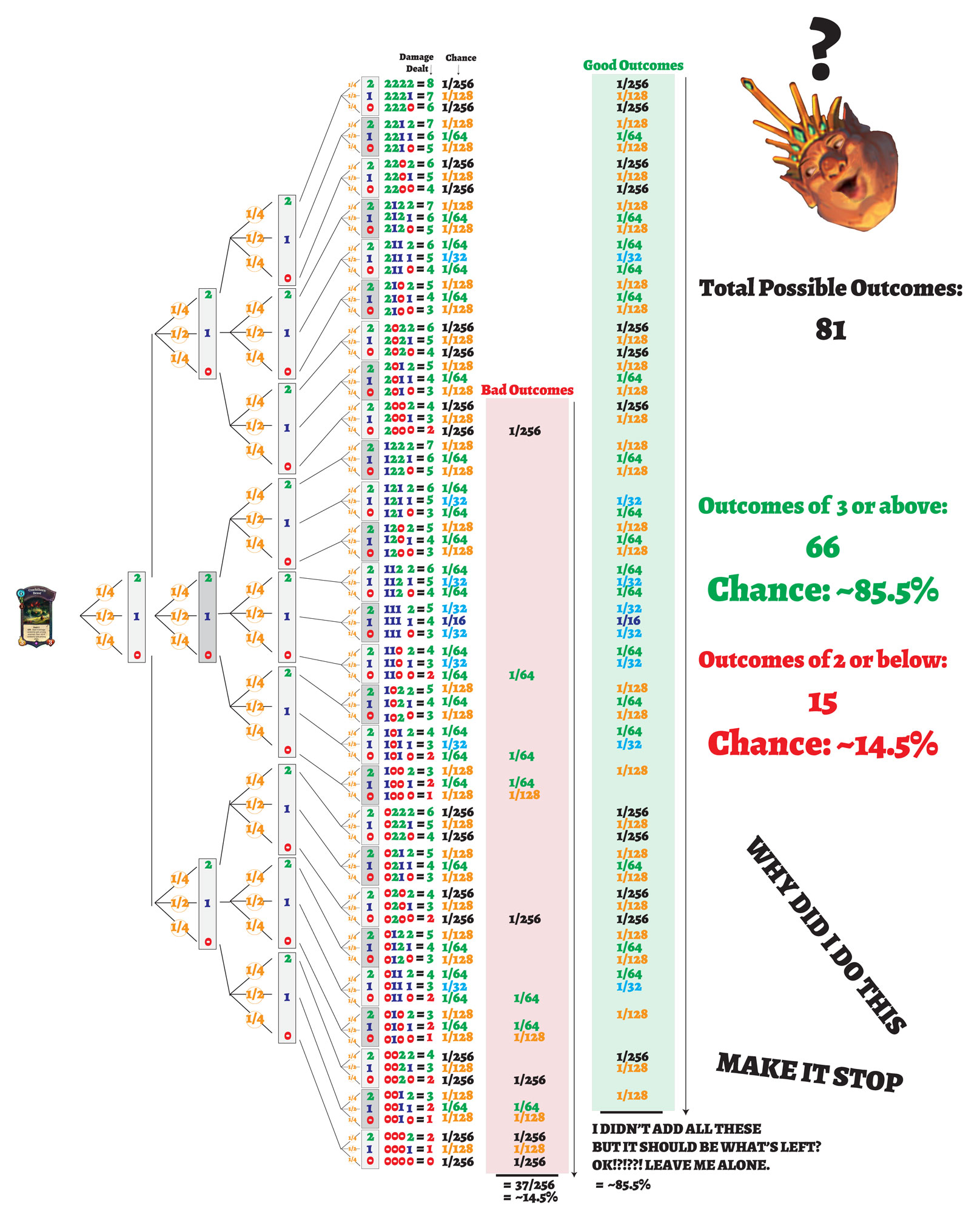 According to my calculations, in this instance Maihem had a roughly 85.5% of achieving lethal orb damage after playing Crackthorn Beast.

In only 14.5% of instances would this not have been the case.

But what actually happened? 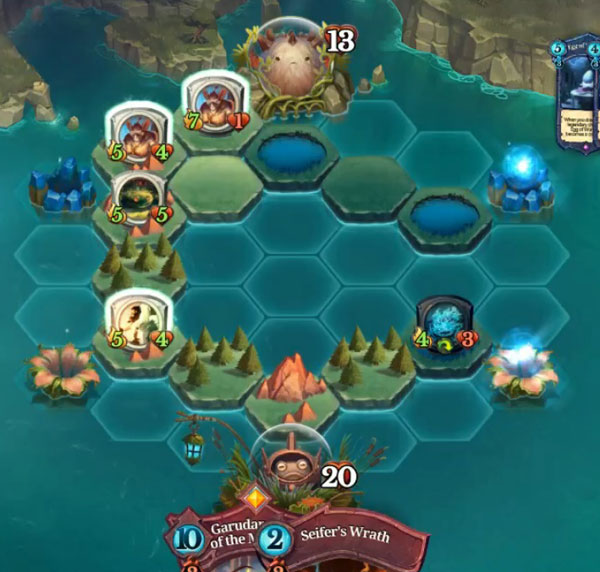 This left him one damage short of lethal. KumpelKefer surrendered the following turn, making this entire series of calculations irrelevant.