How to build a Yellow deck

Yellow has access to a lot of different types of cards. You have the only access to hard removal in the game combined with strong rush cards with a bit of damage based removal. Flying is Yellow’s main form of accessing ocean tiles combined with movement based mobility. Your weaknesses are based on the decks archetype but Yellow does lack creatures with strong stat-lines. Your highest base attack tops at six with Azarai. Yellow specializes in small and mid-range creatures, overrunning their opponents.

Rush, Haste and You

Yellow has a powerful arsenal of tools to excel as a rush deck. You win by overwhelming your opponent with strong cheap creatures and chip away at your opponents Orb with Haste creatures. Yellow has access to event cards that give you Faeria allowing you to focus on aggression instead of farming. 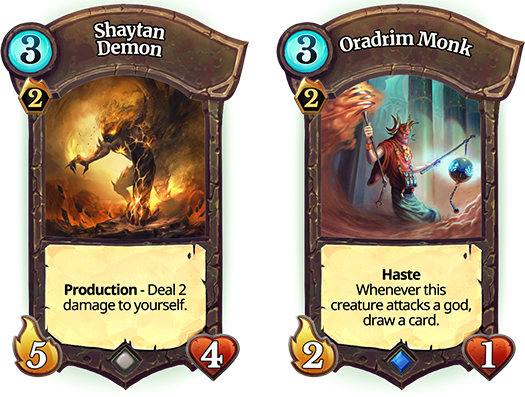 Shaytan Demon offers you a powerful cheap creature at the cost of taking periodic orb damage. This ultimately won’t matter as an aggressor against a defender but can be an issue when racing another rush player. Oradrim Monk can push damage and draw you an extra card giving you more firepower to finish match. 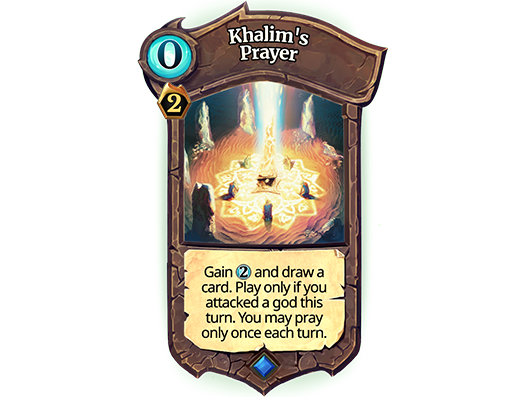 Rush strategies can be countered by Taunt creatures. Haste creatures come with the price of low health stats making them easy to remove. Drawing cards can be crucial to get your economy events going as you don’t specifically farm Faeria with this archetype. Khalim’s Prayer is a crucial part to a rush strategy to recharge your aggression once you’re out of steam.

Flying is one of Yellow’s primary mechanics so it’s no surprise that the colour has a lot of flying synergy. Yellow Flyer decks get access to power ups to give your creatures more staying power on board. 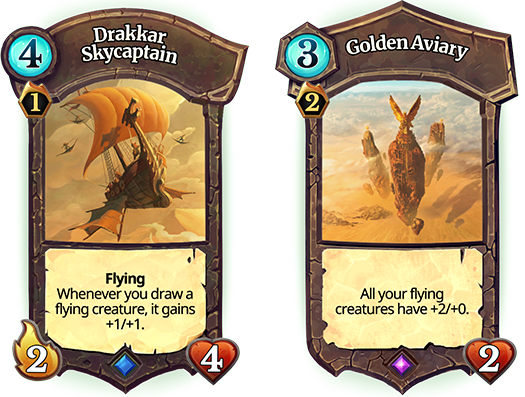 Control is one of Yellow’s stronger archetypes because of mobility and removal. You rely on controlling the wells with cheap creatures while answering your opponent’s threats with removal. Starving your opponents of Faeria is main win condition for this archetype. 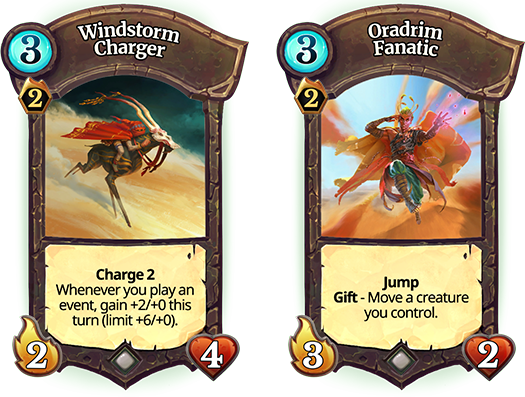 Both these cards are core parts of any type of control deck. Windstorm Charger gets +2 attack whenever you play an event. Control likes to play a lot of removal and movement events which allows your Chargers to gain a powerful attack stat capable of clearing the largest creatures. Oradrim Fanatic is a key early Faeria harvester but also provides essential mobility to control the board. His Jump ability makes it easy to double collect in the well spots. 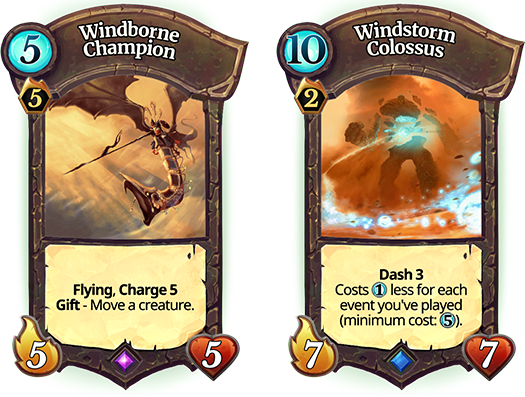 Yellow Control has two popular builds, one based around Windbourne Champion and the other based around Windstorm Colossus. Windbourne Champion builds require five deserts during the course of the game. With Charge 5, Flying and a mobility gift you will be able to control the board with ease thanks to the cards superior movement. Windstorm Colossus is a threatening creature that can dash into the battle. The more events you play, the cheaper it will cost. Yellow Event decks often run more event cards that your standard control in order to greatly reduce the cost of the Colossus.

Yellow has a toolbox of utility that allows them to excel in board control and rushing. If you enjoy relentless aggression or powerful mobility then Yellow might be for you. Outland Ranger is a crucial card in most Yellow strategies because of the event synergy in the Windstorm cards. Be sure to make use of her.